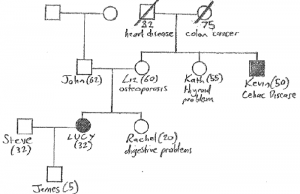 Sometimes there’s very little you can do to avoid illness or disease. Your family background comes into play, sometimes outweighing all of your healthy habits, such as eating farm-to-table organic, and exercising on a regular basis.

Just because your mother or grandfather had a certain disease doesn’t mean you’re doomed, however. It does give you extra information so you can head off disease before it gets out of control; it also lets you know the red flags to watch out for.

Likewise, the more people in your family who had the disease, the more likely you are to develop it. That’s why knowing your genealogy and family tree can play a crucial role in taking care of your health.

A broad range of diseases and disorders can “run in the family.” If you know some of your ancestors had a certain medical condition, or your parents died of something besides an accident or old age, it’s worth researching.

Knowledge is power, and knowing the details can help you and your doctor work out a plan of action. But it’s also important to know some of the most common diseases which may be genetically based.

These include dementia (most commonly Alzheimer’s), arthritis, asthma, blood clots, various types of cancer, depression, diabetes, heart disease, high cholesterol, high blood pressure, birth defects and miscarriages, and strokes. There are many others and it’s not always just a case of “bad luck.”

Certain racial and ethnic groups are more prone to particular diseases than others, and understanding these health disparities can help you plan for a healthier future.

In some cases, the diseases are obviously based in genetics because they’re derived from a mutation in the gene that has been passed down from the parents. Genes make up tiny systems in body cells that dictate not only what you look like but also how the body works.

Genetic diseases include cystic fibrosis, muscular dystrophy, and Huntington’s disease, to name just a few. Sometimes these genes are dormant and the condition only appears in the child when both parents are carriers.

Lifestyles and the environment can exacerbate a disease that’s buried in the genes but wouldn’t have appeared otherwise. Your weight, diet, how physically fit you are, job, where you live, and alcohol/tobacco use can all play a role.

For example, you might be prone to heart disease but it wouldn’t have developed if you hadn’t taken up smoking.