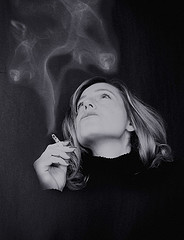 If you are a smoker, you’ve probably heard this line so many times you cannot even begin to count it – smoking is bad, you’ll probably die of cancer at a young age. Maybe you’ve been told something along those lines, not exactly the same words. The idea is the same though – the general belief is that there is a direct correlation between smoking and lung cancer. And why not? After all, we all know that smoking is not good for the health. Then again, smokers know that it is not that easy to quit.

Now I am not advocating smoking here but here’s something to think about. There are people who are heavy smokers for most of their lives and yet live to a ripe age. Then again, there are people who maybe light or moderate smokers and develop lung cancer. So what gives?

A new study at the Harvard Medical School offers an explanation. According to Dr. Howard Levine:

Different versions of genes increase the risk of both lung cancer and smoking addiction, according to the new research. Smokers who get the gene variants from one parent have a 30% greater risk of lung cancer. The risk goes up 80% for smokers who get the genes from both parents. Another study found that people with these genes get addicted more easily and smoke more. Three different studies found the variant genes on chromosome 15. They were published in the journals Nature and Nature Genetics.

In short, there is more to the equation than simply smoking and lung cancer. There is a determining factor as well – one’s genes. This finding is certainly not an excuse to keep on smoking but it does bode well for those who may not have those genes as well.