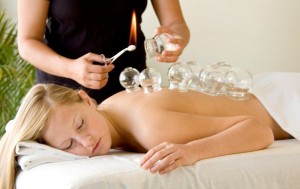 An obvious sign to know that a person has had some cupping therapy is the presence of circular red spots on the back or neck that look like hickeys. They’re actually cupping marks.

Unknown to many, cupping is an Eastern medicine practice that also incorporates acupuncture. The therapy that takes half an hour is able to treat varied problems including stiff neck, cold shoulder and even respiratory issues.

This practice believes that the problems of the body are caused by stagnant blood. But with the cupping procedure, the tension in the body is removed and blood circulation is improved.

Cupping comes in two forms – the stationary and the sliding type. The stationary type involves using cups in one section of the body resulting in the round marks. The sliding type, on the other hand, involves the use of a cup that is moved around as it forms a suction.

A cup with a gun-like device is the tool used in this procedure. For the sliding type, a small piece of paper soaked in alcohol is put into the cup, set on fire and applied on the back. The fire immediately goes out when oxygen is no longer present.