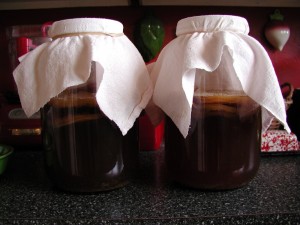 A sort of tea substitute wonder-drug, kombucha has been used by Eurasians for more than 2,000 years to heal a number of ailments, as well as a cure-all and elixir in ancient Chinese medicine. First used to treat the chronically ill or diseased, people with infections, or folks with generally weak immune systems, kombucha has a number of incredible health benefits that have made it widely popular today.

Kombucha is a substitute that Russian peasants used instead of purchasing tea. They would take chomba, a cancerous growth on birch trees, and steep it into a tea-like beverage that was inexpensive.

A doctor noticed that these peasants had much lower rates of cancer. The peasants had unearthed a secret that Chinese herbalists had known for thousands of years: chomba, called in its fermented form kombucha, is a tasty and beneficial wonder-elixir. So wonderful, in fact, that the Chinese took to calling it the “Immortal Health Elixir.”

The many benefits of kombucha include:

Kombucha is full of lactic acids, which are vital for the health of the digestive system. It’s also loaded with probiotics and yeast bacteria that help to rid the stomach and intestines of any harmful pathogens that might hinder the digestive process. It also improves the assimilation of nutrients into the body.

The glucosamines present in kombucha help to build up cartilage in the joints and reduce a person’s risk of arthritis or other joint-related ailments that typically develop as we age.

Glucosamines also provide moisture for the joint, to help with lubrication and reduce joint pain. Similarly, kombucha is full of amino acids that serve as the building blocks of healthy proteins — so the muscles attached to those joints are strong as well.

As a natural detoxifier, kombucha is a natural source of malic acid, which appears in the body during the detoxification process. It is full of the enzymes and acids the body naturally produces while detoxifying, and helps to destroy cancer cells, rid the body of unwanted wastes, and lighten the load on the kidneys, liver, and pancreas.

The glucaric acid present in kombucha helps to eliminate the production of cancerous cells in the body.

In China it was traditionally the duty of the grandmother to include kombucha in the production of the daily tea. Serve yourself some of this delicious sugar substitute at home by following a few easy steps.

The result will outweigh all those supplement bottles sitting on your countertop; the health benefits will certainly be much better than what you get from the various sugar substitutes you have poured into your coffee or tea in the past.