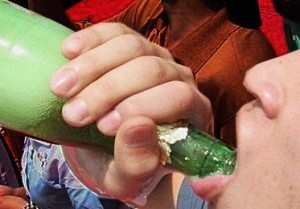 We all know that alcohol is not good for the health, at least too much of it. Every time I think about this topic, I remember that line from an old Star Trek book I read as a teenager; something about alcohol being a poison that man imbibes voluntarily. I think it was from the book about Spock dying….

Anyhow, this knowledge has not sunk in for so many people. Even with hard scientific facts, hard drinking seems to be prevalent in many nations. There is even this recent study about how heavy drinking is the cause in 1 out of 4 cases of dementia. MSN Health has the story:

Three UK newspapers, The Daily Mail, The Telegraph and The Guardian, reported on Monday that excessive alcohol consumption could be to blame for one in four cases of dementia.

The reporting was based on a peer-reviewed study, published in the journal Alcohol & Alcoholism, that found that heavy drinkers can begin to experience serious memory problems as early as their 40s, and that women are more susceptible to cognitive impairment because they metabolize alcohol less effectively.

Jane Marshall, M.D., one of the authors of the study, tells The Telegraph, “People think that dementia is something that happens to people over 65. But a lot of those under 65 have got cognitive problems and a large proportion of the problems in that group are related to alcohol.”

I honestly do not see any reason to question these statements. I guess it’s all a matter of personal choice. If one wants to party now and suffer tomorrow, then that’s his problem. As for me, this is a stark reminder that drinking should ALWAYS be done in moderation.