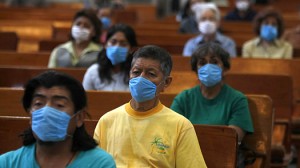 That’s not an alarmist type of statement – it is true. This figure actually comes from the experts at the Centers for Disease Control and Prevention, which estimates the real number of cases all throughout the country as about 100,000. The fact is that they only have about 4,700 documented or reported cases as of Friday. As for the number of deaths, only five so far have been reported and attributed to swine flu.

The good news is that experts also say that this recent outbreak of swine flu is not as bad as it could be, and is in fact quite mild. AJC has this report:

Most cases of swine flu occurring in the United States appear to be mild, health officials said.

In fact, “estimates of the confirmed and probable cases in the United States is probably not the best indicator of transmission at this point,” the CDC’s Jernigan said. “The outbreak is not localized, but is spreading and appears to be expanding throughout the United States. This is an ongoing public health threat.”

Jernigan said there also seems to be more cases of flu generally in the United States — both the seasonal and the new H1N1 swine flu — than is usually seen at this time of the year. “There are 22 U.S. states that are reporting widespread or regional influenza activity, which is something that we would not expect at this time,” he said.

Mild or not, it is best to always be on the alert and to stay as healthy as possible.