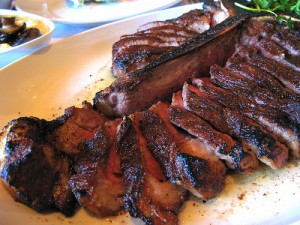 So protein is not at all that bad for your kidneys, huh? Well, I took that post to heart and am working on some pork chops right now…am actually salivating as I smell them cooking. Anyhow, here is another food myth from the same article.

Myth No. 3: Red meat causes cancer
The origin: In a 1986 study, Japanese researchers discovered cancer developing in rats that were fed “heterocyclic amines,” compounds that are generated from overcooking meat under high heat. And since then, some studies of large populations have suggested a potential link between meat and cancer.

What science really shows: No study has ever found a direct cause-and-effect relationship between red-meat consumption and cancer. As for the population studies, they’re far from conclusive. That’s because they rely on broad surveys of people’s eating habits and health afflictions, and those numbers are simply crunched to find trends, not causes.

The bottom line: Don’t stop grilling. Meat lovers who are worried about the supposed risks of grilled meat don’t need to avoid burgers and steak; rather, they should just trim off the burned or overcooked sections of the meat before eating.

I am so glad to read this. Even if I didn’t really believe all that much in the myth, I still had the niggling feeling that maybe I should avoid red meat. Of course, there are other health reasons to moderate consumption of those steaks but still, knowing that they do not cause cancer is a good thing.