Stretching provides a lot of benefits to the mind and body. Isn’t it that this is a normal instinct even among newborns? Some old folks also believe that a baby that stretches often will grow tall later on in his life. 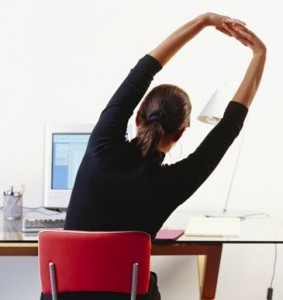 Basically, stretching relieves the body of aches and pains. It helps build and relax the muscles as well as improve one’s posture.

A new research has found that other than its physical benefits, the act of stretching is helpful as well in relieving stress particularly at work. The study done by researchers from the Universidad de Zaragoza revealed that a stretching program done on a daily basis at a person’s desk can help relieve anxiety and pain.

During the study, the respondents made up of 134 office workers were divided into two groups. One was given a 10-minute stretching activity every day for a period of three months. Those in this group experienced better mood, vitality and flexibility compared to the other one.

There are many types of stretching exercises that office workers as well as stay-at-home writers and bloggers can do every day to relieve stress. Previous studies have shown that long hours of sitting at the desk is unhealthy as it can increase a person’s risk for heart disease, obesity and musculoskeletal problems including back pain and strain injuries. Medical experts recommend standing up, moving around and walking every 20 to 30 minutes are most beneficial.

One popular form of stretching exercise is doing it in a standing position and allowing both hands to reach for the ceiling. Hold for 10 counts and then bring down your hands. You can repeat this five to eight times.

Another version is to bend your upper body to the left and right with the hands reaching out. This is still done while in a standing position with feet apart for balance. While in the bending position, hold for about five seconds before moving to the other direction.